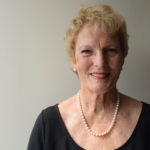 Recognizing Achievement and Celebrating Success, B&T honors women in the finance, insurance and real estate sectors for the 2017 Women of FIRE awards. These women have shown substantial success in their field, they have demonstrated a commitment to professional and personal growth, and their work has enriched or advanced their field of endeavor. These women are mentors, philanthropists, leader and innovators. They devote their time and their hard work to making their companies and their communities, a better place fora ll. They are paving the way in what were once male-dominated sectors. Congratulations to our COO, Gwen Noyes, and to all the Women of FIRE! Gwendolen Noyes grew up on an organic farm in Illinois in the 1950s “long before organic farms were something that was ‘cool,’” she said with a laugh. More than being uncool, Noyes described the lifestyle as “fairly isolated” for a kid. “I didn’t have a neighborhood. … So, I started drawing and thinking about [ways to create] community for farming-oriented people.”

Today, Noyes is a partner at Oaktree Development and senior vice president and COO at Greenstaxx, a building system that aims to change the way housing is created.

Noyes admits that when she first told people she wanted to be an architect, it was “kind of a feminist statement.” She studied art and sociology in college, taking all of the architecture classes that she could.

“It became clear to me that community can be made through architecture, and the placement and quality of a building [can be] very influential on the quality of people’s lives,” Noyes said. When we talk about architecture, “housing is kind of in the background. … But housing is the fabric of many cities and towns.”

Noyes brings this philosophy to all of her work, particularly so with Greenstaxx, a new system for designing and building prefabricated multifamily homes that utilizes sustainable design strategies. The Greenstaxx system was conceived by Noyes’ husband, Arthur Klipfel, who is Greenstaxx’s president and CEO.

Noyes knows that many people have an instant negative reaction to the idea of prefabricated housing, but she and her husband are working to change that.

“There’s old-school thinking that anything pre-fab is going to be flimsy and cheap, which is absolutely the diametric opposite of what the situation can be with modular housing,” she said. “Beyond that, the Greenstaxx system can further the whole process of industrializing housing by bringing in repetition … If [the construction] is done over and over again, you can perfect it. You can reduce the cost.”

A 68-unit project in Newton, set to begin construction next spring, will be the first that uses Greenstaxx’s “fully integrated system” – that is, a system that brings together the architect, developer, modular manufacturer, contractor and all needed contacts.

As Noyes and her husband complete more projects, the buzz around Greenstaxx is sure to keep growing.

“They’re at the forefront of getting modular construction to work in a really practical way,” Hoban said.